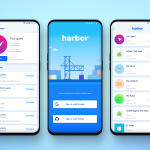 Android is a software package and linux based operating system for mobile devices such as tablet computers and smartphones.

It is developed by Google and later the OHA (Open Handset Alliance). Java language is mainly used to write the android code even though other languages can be used.

The goal of android project is to create a successful real-world product that improves the mobile experience for end users.

There are many code names of android such as Lollipop, Kit kat, Jelly Bean, Ice cream Sandwich, Froyo, Ecliar, Donut etc which is covered in next page.

2) Anyone can customize the Android Platform.

3) There are a lot of mobile applications that can be chosen by the consumer.

There are many android applications in the market. The top categories are:

The history and versions of android are interesting to know. The code names of android ranges from A to J currently, such as Aestro, Blender, Cupcake, Donut, Eclair, Froyo, Gingerbread, Honeycomb, Ice Cream Sandwitch, Jelly Bean, KitKat and Lollipop. Let’s understand the android history in a sequence.

4) Originally intended for camera but shifted to smart phones later because of low market for camera only.

5) Android is the nick name of Andy Rubin given by coworkers because of his love to robots.

6) In 2007, Google announces the development of android OS.

On the top of linux kernel, their are Native libraries such as WebKit, OpenGL, FreeType, SQLite, Media, C runtime library (libc) etc.

The WebKit library is responsible for browser support, SQLite is for database, FreeType for font support, Media for playing and recording audio and video formats.

In android runtime, there are core libraries and DVM (Dalvik Virtual Machine) which is responsible to run android application. DVM is like JVM but it is optimized for mobile devices. It consumes less memory and provides fast performance.

On the top of Native libraries and android runtime, there is android framework. Android framework includes Android API’s such as UI (User Interface), telephony, resources, locations, Content Providers (data) and package managers. It provides a lot of classes and interfaces for android application development.

An android component is simply a piece of code that has a well defined life cycle e.g. Activity, Receiver, Service etc.

An activity is a class that represents a single screen. It is like a Frame in AWT.

A view is the UI element such as button, label, text field etc. Anything that you see is a view.

Intent is used to invoke components. It is mainly used to:

For example, you may write the following code to view the webpage.

Service is a background process that can run for a long time.

Fragments are like parts of activity. An activity can display one or more fragments on the screen at the same time.

It contains informations about activities, content providers, permissions etc. It is like the web.xml file in Java EE.

It is used to test the android application without the need for mobile or tablet etc. It can be created in different configurations to emulate different types of real devices.

Testing Android applications on emulator are sometimes faster and easier than doing on a real device. For example, we can transfer data faster to the emulator than to a real device connected through USB.

The Android emulator takes additional requirements beyond the basic system requirement for Android Studio. These requirements are given below:

Run an Android app on the Emulator

To start the Android Emulator and run an application in our project:

1. In Android Studio, we need to create an Android Virtual Device (AVD) that the emulator can use to install and run your app. To create a new AVD:-

1.2 Click on Create Virtual Device, at the bottom of the AVD Manager dialog. Then Select Hardware page appears.

1.4 Select the system image for the particular API level and click Next. This leads to open a Verify Configuration page.

1.5 Change AVD properties if needed, and then click Finish.

2. In the toolbar, choose the AVD, which we want to run our app from the target device from the drop-down menu.

Launch the Emulator without first running an app

To start the emulator:

While the emulator is running, we can run the Android Studio project and select the emulator as the target device. We can also drag an APKs file to install on an emulator, and then run them.

Start the emulator from the command line

The Android SDK includes the Android device emulator. Android emulator lets you develop and test out the application without using a physical device.

Using the emulator command, we will start an emulator. It is an alternative to run our project or start through the AVD Manager.

Here is the basic command-line syntax for starting a virtual device:

For example, if we execute the emulator from Android Studio on a Mac, the default command line will be similar as follows:

To display the list of AVD names, enter the following command:

Run and stop an emulator, and clear data

From the Virtual Device page, we can perform the following operation on emulator:

Hi everyone. This is Vishal Yadav, & I'm an Android developer at Techwarezen pvt. ltd. and here I'm sharing my experience and knowledge with you which I have learnt. Hope It may help you improving yourself. Thank you! *Note - Please specify if I uploaded any wrong content.*

How to install Android in your window?